Hello again! I have a new layout to share today! I was inspired by the sketch at The Studio Challenges for this one: 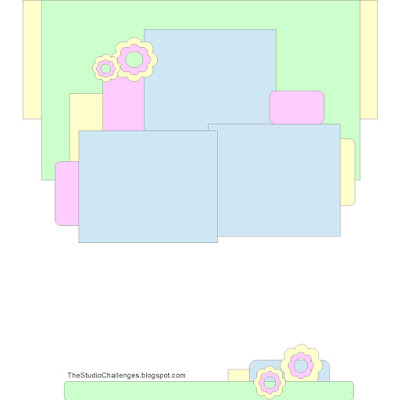 Since my photos were all vertical, I rotated the sketch 90 degrees. I wanted to add some interest to my background cardstock so I ink blended some stars. Then I added my patterned paper and photos. The title was cut using the Cricut. To embellish the page, I fussy cut some stars from a sheet of patterned paper, used some gem stars and a few star sequins. I have a book a of vellum baby phrases that I pulled the "nap" and "sleep my child" pieces from. 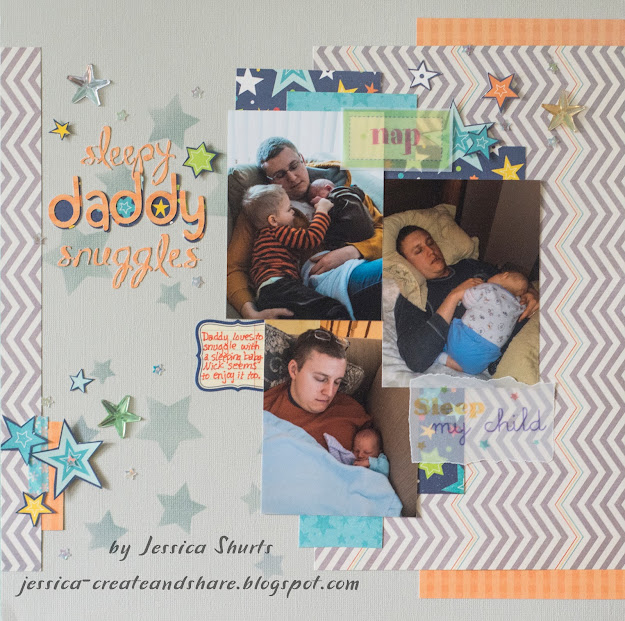 Thanks for stopping by to check out my layout!
Posted by Jessica at 6:00 AM No comments:

Hello! I have a new set of cards to share today! I was inspired by this sketch from CAS(E) This Sketch: 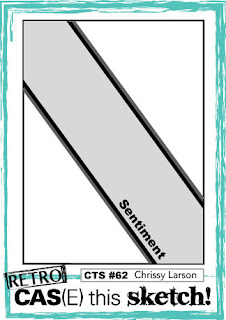 Posted by Jessica at 4:57 PM No comments:

One and Only- Fusion

Hello! I have a new card to share today! For this card, I was inspired by the current challenge at Fusion: 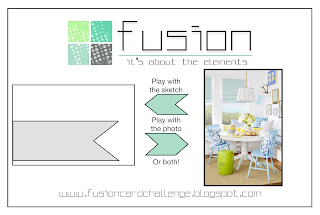 I liked the bright, airy colors in the inspiration photo, so I started with those. I used my Cricut to make the background cut. I used a layer stamp set by Altenew for the roses, where I brought in the yellow from the photo. I stamped and heat embossed the sentiment onto vellum, bringing in the green. When I laid the vellum over the background cut, the sentiment was a little hard to read, so I smudged some white paint across the back of the vellum behind the sentiment to make it stand out more. I finished off the card with some self adhesive pearls and liquid pearls. 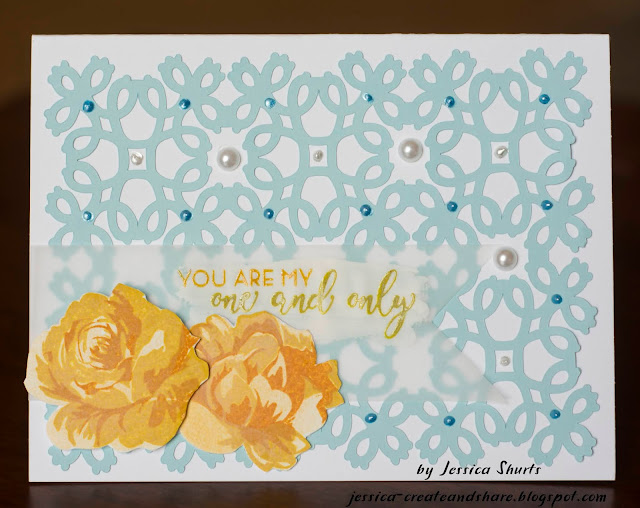 Posted by Jessica at 3:48 PM No comments:

July Calendar Page- Stick It Down

Hello! I have my July calendar page ready to share! I was inspired by the current sketch at Stick It Down: 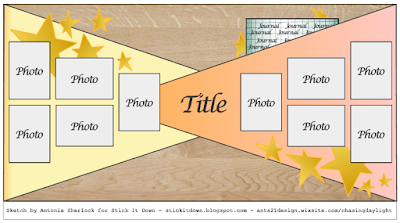 I adjusted my photo sizes and orientations to work with the photos I had. This meant that I didn't have space for my title in the middle of my page so I moved that to the right hand page. Once I had my patterned papers attached to my background, I used a mask and Glitz glitter gel for some stars. After those dried, I attached my photos. I printed my journaling and cut it into strips. I had stuck one of the stips on top of the left hand page when I was working on placement and then decided to move it. It roughed up the paper when I pulled it off, so I added the ribbon across the top of my layout to cover that spot. I finished off the layout with some punched blue stars. I considered adding more, but I felt there was enough going on at this point that I left it as is. 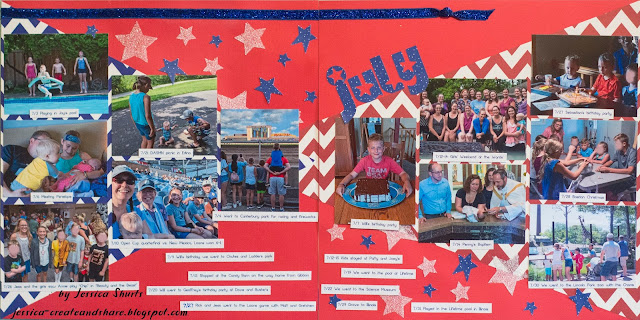 Hello again! I have two more new cards to share today! Both of these were based off the same sketch, the current one at Sketch Saturday: 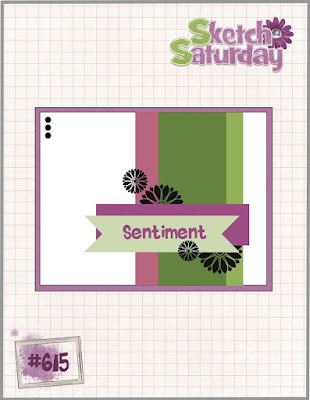 I started by making this masculine version. I pulled coordinating scraps out. For the background, I used a background stamp and white ink to add some interest. I attached the sentiment and patterned piece behind it with foam tape for dimension. For the stars I used a couple of star punches and outlined the stars with a silver pen to make them stand out a bit more and coordinate with the silver heat embossed sentiment. I finished things off with a few silver Nuvo Drops. 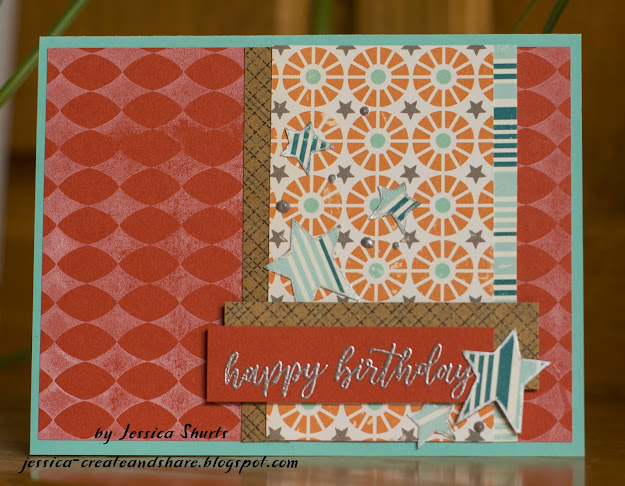 Next up is this feminine version. I used scraps for this as well. I ended up flipping the sketch becase my background stamp wasn't wide enough, so I had to stamp it twice and the gap was on the left side of my card. I followed a similar process as the card above, except that I used some premade flowers instead of stars as my accents for this one. 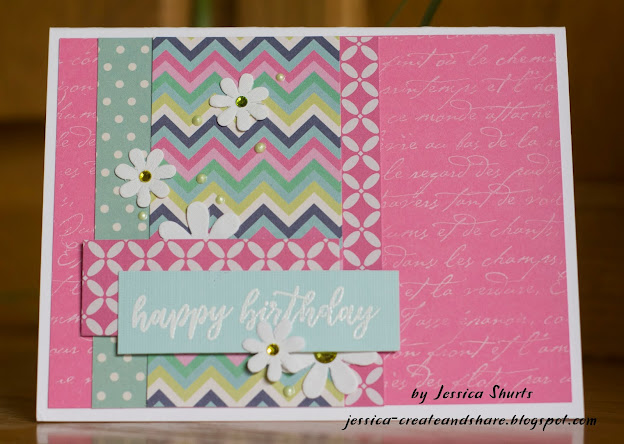 Posted by Jessica at 6:00 AM No comments:

Birthday Card- Stick It Down

Hello! I have a new card to share today! I started with this card sketch from Stick It Down: 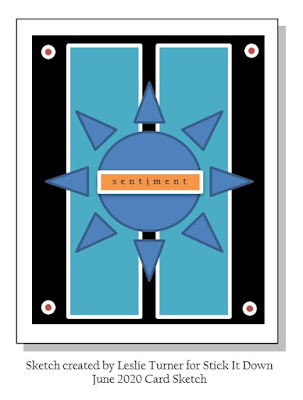 I pulled out some scraps and some neglected stamps and went to work. The polka dot paper was the inspiration for my colors. I didn't have a pink ink that was lighter, so I went with this darker color and then matched my card base to it. After stamping the carousel horse, I colored it with a water brush and Gelatos so it has a nice shimmer to it. The flower circle is attached to the card with foam tape for dimension. I decided not to put a sentiment on the front since there was quite a bit going on already. I finished things off with some Stickles in the center of the flowers. 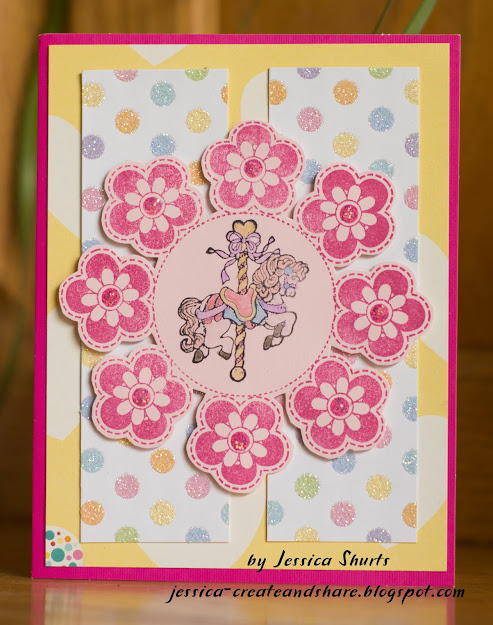 Hello, I have a new layout to share! It is a two pager, but I used a single page sketch for the left hand page. I used this sketch from Sketches in Thyme: 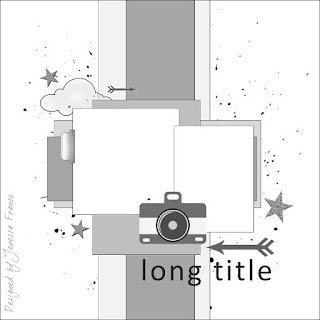 I have a winter collection of papers, but it is blue white and reds, which clashes with my daughter's pink coat in these photos, so I had to go searching for some other papers. I found the heart paper with the pink backside first. Then I went to my scraps and pulled some pinks and blues that went with the colors of the kids' coats. It was fun to use up some really old scraps on this one! I added some texture to my cardstock background with some ink splatters and stamping. Once I had everything stuck down, I created my title with some Thickers and my Cricut. I wrote my journaling in the open space under my title. I added some stickers and rub ons to my clusters. And, as I seem to be doing on all of my layouts right now, I finished things off with some little embellishments: white dew drops and sequins. The combination of mist, stamping, dew drops and sequins is perfect for the Lasting Memories "confetti" challenge! 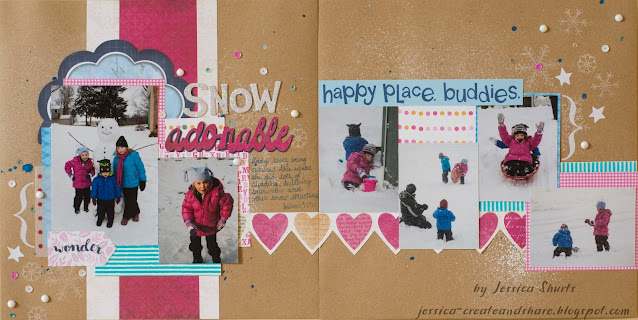 Jessica
I am a Catholic, wife and mother to 5. Join me as I explore my vocation and document the journey through photos and scrapbook pages. 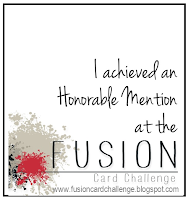 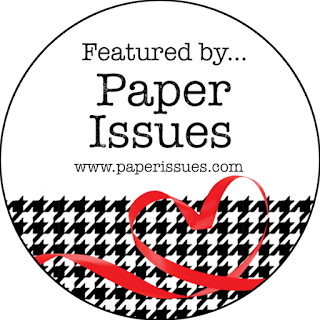